Sharing a photo of the show’s ticket, Freeze asked how much Christ charged for the last supper. He added a part in the bible that says gifts received freely should be given out freely.

He wrote: “Platinum table 5M????? How much did Christ charge for the last supper?

“? Matthew 10:8 ? New International Version. Heal the sick, raise the dead, cleanse those who have leprosy, drive out demons. Freely you have received; freely give.” 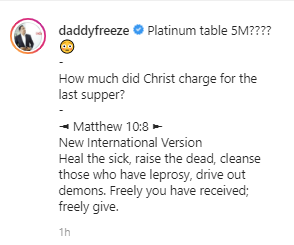 I was never denied US visa – Bishop Oyedepo

Bishop David Oyedepo, the senior pastor of the Living Faith Church Worldwide, has denied reports claiming he was refused a…

Imo state residents once again took to the streets of Owerri, the state capital today January 30th, to protest the…

A Slow Dance Led to Their Forever Journey! Roland Aborisade and Awujola Funke

A Slow Dance Led to Their Forever Journey! Roland Aborisade and Awujola Funke Roland and Funke are giving us all the…