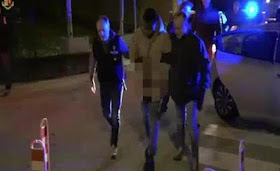 Two Nigerian mafia clans operating in Italy and abroad to traffic and sell Nigerian women into sex slavery and prostitution have been busted by Italian police.

In a massive operation on Tuesday, some 32 people were arrested in Puglia, Sicily, Campania, Calabria, Lazio, Abruzzo, Marche, Emilia Romagna, Veneto and, abroad, in Germany, France, Netherlands and Malta.

The report by ANSA, Italian news agency did not indicate whether the 32 are all Nigerians and whether there were European collaborators arrested with them.

In July, the Italian Police also announced the arrest of 19 Nigerians, said to be members of a mafia.

The probe was led by Bari anti-mafia prosecutors and coordinated by the central operational service in Rome with the help of Interpol.

The investigation was carried out by the Bari flying squad.

The gangs operated with the slogan “the three Ds”, referring to “donne, denaro e droga” (women, money and drugs).

Some 49 people were placed under investigation, all Nigerian nationals.

Investigators said the women, most of them trafficked and subjected to physical and psychological violence, also via voodoo rites, were forced to become sex workers.

The proceeds of the prostitution rackets were sent to Nigeria via couriers or ‘hawala’ systems, or reinvested in drug trafficking.

Thieves vandalize vehicles at a car shop in Lagos (photos)

2 CPM workers arrested over death of activist in Sabarimala protests

The deceased man, Chandran Unnithan, was part of the protest march taken out by Sabarimala Karma Samiti on Wednesday evening…