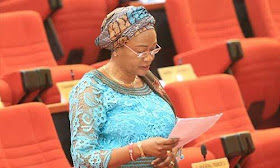 The Senate has taken the second reading of a bill seeking to remove gender restrictions in the offence of rape and related matters.

If passed, the bill will formally recognise men as victims of rape as applicable.

The bill also seeks to remove the statute of limitation on defilement, while it also seeks increasedpunishment for kidnapping.

Introduced by Senator Oluremi Tinubu (APC-‎Lagos Central) at the Senate plenary on Tuesday, the SB2 is “A Bill for an Act to amend the Criminal Code Act CAP C38 LFN 2004 to delete the Statute of Limitation on defilement, increase in punishment for the offences of kidnapping, remove gender restrictions in the offence of rape and for related matters, 2019 (SB. 2).”

In response, Senator Bala Na’allah (APC-Kebbi South) expressed support for the bill, but noted that the amendments to criminal code being sought are limited in application to southern states.

Na’allah said, “The criminal code that sought to be amended is only applicable to the southern states.

“The intent of this Bill is to make it on general application in Nigeria, and that is why we must commend Senator Tinubu for this.

“The issue of rape has been a very difficult provision in our statue and dates back to the English Law.”

Also speaking in support, Senator Emmanuel Bwacha (PDP-Taraba South) said, “I think this is a bold step in the right direction. I think this is quite commendable.”

READ  Teyana Taylor reveals what she will do if Iman Shumpert cheats on her
Loading...

Kim Kardashian renounces n.u.d.e.s for her children's sake after 'awakening'

Kim Kardashian renounces n.u.d.e.s for her children's sake after 'awakening' Kim Kardashian has revealed she has banned herself from taking…

Chief Gani Adams, the Aare Onakakanfo of Yorubaland, on Saturday installed 21 chiefs –in-council at an event in Lagos.   Adams…