18 feared dead as plane crashes into houses in Congo 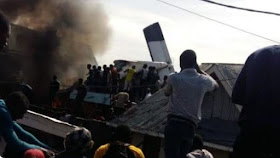 At least 16 passengers and two crew are believed to have died after a plane crashed into houses in Goma city in eastern Democratic Republic of Congo.

The aircraft crashed in the Mapendo neighbourhood after “missing” its take-off from the city’s international airport, North Kivu regional governor Nzanzu Kasivita said.

He said there had been deaths, but did not give a number.

Residents on the ground were among the casualties, local media reported.

Air accidents are relatively frequent in DR Congo amid lax safety standards and poor maintenance, and all the country’s commercial carriers are banned from operating in the European Union.

Rescue workers are evacuating the injured and retrieving bodies from the wreckage.

SPORTEPL: Khan speaks on allowing Chelsea play at Wembley Stadium. American businessman, Shahid Khan has said he will do “everything…