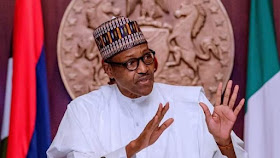 Nigeria’s President, Muhammadu Buhari has told Nigerians to count him out of any attempt to seek a third term in office as being speculated.

Buhari, who spoke at the National Executive Council, NEC, of the All Progressives Congress APC, in Abuja on Friday said the Nigerian constitution did not allow him to seek third term and that he had no plan of doing anything like that.

The president stated that such speculations by some Nigerians were untrue as there was no plan for such.

The President urged the NEC members to be conversant with Nigerian Constitution to avoid factors that made the party to loss election in some states.

According to the President, anybody who failed to maintain the respect of his constituents and is thrown out is his problem.

“Like the chairman said, all those who left us to the upper house, none of them was voted by his constituents. You want to take our people for granted but they know what they are doing,” he said.

Buhari also urged the members to ensure that they are respected in their constituencies. “Yesterday at the meeting of the caucus, I made some comments which are still relevant here.

“But to me, the most important is that every member of NEC should reposition him or herself to make sure that he has dominated his constituency politically. The aim is that, as I mentioned yesterday, history will not be fair to us outrightly, if the APC collapses at the end of this term.

“History will be fair to us, if the APC remains strong and not only holds the centre but make gains. People will reflect with nostalgia that once upon a time, the builders of APC made lots of sacrifices, worked very hard. The sacrifices are physical, material and moral to make sure that we maintain the leadership politically.

“This is what we should all aim at and ensure that our constituencies understand us and follow us to this great objective,” he said.

18 feared dead as plane crashes into houses in Congo

EFCC to arraign ‘Mompha’ on Monday for alleged fraud