EFCC to arraign ‘Mompha’ on Monday for alleged fraud 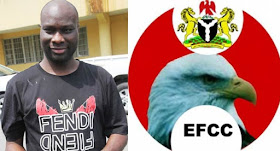 The Economic and Financial Crimes Commission (EFCC) has filed a 14 charge of alleged fraud and money laundering against internet celebrity, Ismaila Mustapha, popularly known as Mompha.

Mompha is to be arraigned before Justice Mohammad Liman of the Federal High Court, Ikoyi Lagos on Monday, November 25.
In the first charge, the EFCC said that between 2015 & 2018, Mompha procured Ismalob Global Investment Ltd to retain the sum of N18m in its account, a sum suspected to be proceeds of crime.

Only yesterday, Mompha had filed a Fundamental Rights Enforcement Suit before the Lagos High Court to challenge his continued detention by the EFCC. He asked the court to award him N5m in damages against the EFCC for what he called his unlawful detention.