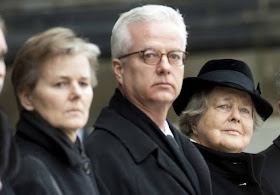 The son of a former German president has been murdered on stage while delivering a medical lecture in Berlin, police have said.

Fritz von Weizsacker was stabbed to death at a Charlottenburg hospital where he worked as a senior physician after the attacker jumped up from the audience.

An off-duty police officer who tried to intervene was seriously injured, Berlin Police said. Mr von Weizsacker died from injuries at the scene of the Schlosspark hospital attack.

The suspect was apprehended by several people and has been arrested, police said.

“We cannot yet say anything about the attacker’s motive,” said police spokesman Michael Gassen.

The 59-year-old victim’s father, Richard von Weizsacker, was one of Germany’s most esteemed presidents – a largely ceremonial post – between 1984 to 1994.

READ  3 schoolgirls in Burundi risk being jailed for scribbling on the president's photo in their textbooks
Loading...