How 9ice exposed Mompha, Hushpuppi, Baddy Osha, others to EFCC 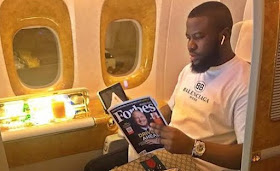 9ice might have unknowingly exposed, Mompha, Hushpuppi Baddy Osha to the Economic and Financial Crimes Commission without knowing.

Recall one of them was picked up last month by EFCC and still in their custody?

A twitter user, @onlydotcom has now called the attention of EFCC to 9ice’s song — Living Things, which was released in 2016 saying, the commission should sit and listen to the song and investigate everyone mentioned.

The commission however says it is ready to go after them, but will need a petition in order to commence a probe against the social media celebrities.

The Twitter user, @onlydotcom had said;  “EFCC, sit down and listen to the song, Living Things, by 9ice and do your work with the fear of God. Nigeria will be better for it.”

The commission then responded; “Do you mean that (song) could be a petition? Not enough anyway.
However, the Eagle still requests a written statement to support any allegation that has been made.”

READ  Olamide Disagrees With Davido On “We Rise By Lifting Others” Statement (Read What He Said)
Loading...

Miley Cyrus and Cody Simpson pack on the PDA

Miley Cyrus and Cody Simpson pack on the PDA They packed on the PDA when they dressed up, and stripped…

Lovely new photo of Bambam and her beau, Teddy A

Lovely new photo of Bambam and her beau, Teddy A Cute....cute! The both where having a nice time