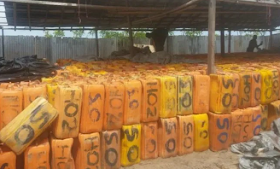 The suspects; Oseni Noah, Toyin Hunsa, Rasheed Amish, Kamoru Ishau and Ibrahim Ojogbele, were arrested and handed over to officials of the Nigerian Security and Civil Defence Corps (NSCDC).

They were nabbed along Badagry creeks by naval personnel attached to the FOB, Badagry, while they were conveying the suspected stolen products on a wooden boat towards Benin Republic.

The Commander FOB Badagry, Capt. Tamuno Senibo, said that the suspects were intercepted by a navy boat on routine patrol.

He said that the boat has 136 jerry cans of 25 litres capacity of suspected PMS.

“The estimated volume of this product is about 3,400 litres, while the boat and out board engines remained seized.

Davido's dad poses with his children and grandkids

Davido's dad poses with his children and grandkids Beautiful fam! One more photo below....