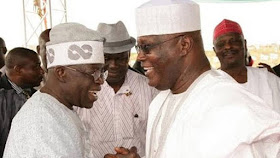 In a statement he personally signed on Supreme Court’s affirmation of President Muhammadu Buhari’s re-election, Tinubu commended PDP and Atiku for their tenacious pursuit of what was their legal remedies.

In statement entitled: “Presidential Election: Supreme Court Affirms Will of The People”, Tinubu also congratulated President Buhari and the APC on a well-deserved legal affirmation of a hard-won electoral victory.

“The rule of law conclusively affirmed the collective voice of the people by dismissing the petition filed by the People’s Democratic Party (PDP) and their presidential candidate, former Vice President Atiku Abubakar.

“The sun rose high in the Nigeria sky today to shine its light over the entire land.

“Atiku should now channel the energy and intellect deployed in the electoral and legal processes toward joining APC “to move this nation more rapidly and assuredly forward.”
“On February 23, the people tendered the foremost expression of their sovereign, democratic will by voting for the re-election of President Muhammadu Buhari.

“This decision and this day will be recorded as important milestones on Nigeria’s inseparable march toward perfecting democracy and the rule of law across our land,” he said.

The APC national leader commended the Supreme Court for its expeditious and highly competent treatment of this important matter.

READ  'Ambode lied, I was never arrested for spending fake dollars in the US'' Sanwa-Olu says
Loading...

29-year-old Ikechukwu Ozorumba pictured above, has been arrested by operatives of the Federal Special Anti-Robbery Squad, FSARS at Adeniji Adele,…