World's most expensive bottle of whisky sells for £1.5m – NaijaSpects Skip to content

World’s most expensive bottle of whisky sells for £1.5m 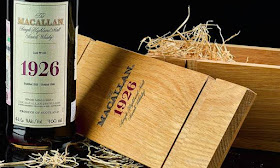 The “Holy Grail” of whiskies smashed the record for the most expensive bottle ever sold, going for nearly £1.5 million at a London auction.

Distilled over 90 years ago and aged in European Oak for 60 years, the bottle was one of only 40 that Macallan, based in Moray, northern Scotland, has confirmed were bottled from Cask 263 in 1986.

“This is the most iconic of all bottles of Scotch whisky, the essential centrepiece of any great collection,” said Sotheby’s auction house, which organised the sale.

“This bottle provides the ultimate opportunity to taste the ‘holy grail’ of all whiskies — a once in a lifetime experience.”

The bottle was the first with the batch’s “Fine and Rare” label to be seen at auction in more than a decade.