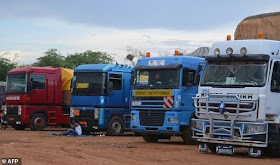 Along with Benin, Niger, which shares a 1,500-kilometre (900-mile) border with Nigeria, has been badly hit by the closure of Nigeria’s border.

A long line of lorries from Niger and elsewhere in West Africa is stranded at Dan Issa. Some are full, some laden with goods. The drivers and their assistants sleep on the ground or in the cabins of their vehicles.

All along the 30 kilometre road between the border and the city of Maradi, customs officials and police officers sip tea or coffee and chat.

Groups of young people at a loose end and motorbike taxi drivers short of customers play cards under the shade of the trees.

Three and a half million people live in and around Maradi. Concern and indignation are growing among the people there, most of whom survive on agriculture and trade.

That makes them highly dependent on their southern neighbour Nigeria, the biggest economy in west Africa with its oil riches and 190 million people.

“We are very angry,” said Ahmadou Amadou, who imports motorbikes for a living. “The business sector is wasting away.” If the border closure continues, then they will be ruined, he added.

Bangladesh sentences 16 to death for killing teenager in harassment case