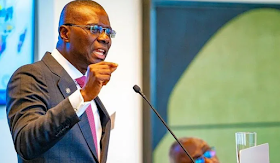 Lagos State Governor, Babajide Sanwo-Olu has sought the endorsement of the House of Assembly for a loan of N250 billion.

The governor’s letter was read on the floor of the House during plenary on Tuesday by the Clerk of the Assembly Mr. Sani Azeez.

According to the governor’s letter, the loan was broken down as: a fixed rate bond of N100 billion from the capital market and an internal loan of N150 billion.

The governor explained that the budgetary provisions of recurrent and capital budget of ministries, departments and agencies were not likely to be utilized before the end of the year, saying that N34.050 billion could be re-ordered.

The the letter, the governor stated that his administration was constrained by the lack of revenue for the remaining months of the year and that it would not be in a position to propose a supplementary budget, which informed the recourse to re-ordering 2019 budget.

READ  'I am not a Yahoo boy' - Young photographer who was arrested by EFCC cries out!!!
Loading...