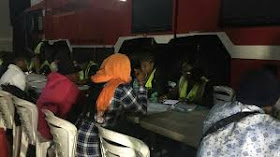 The National Emergency Management Agency on Tuesday received 173 Nigerians assisted to return from Libya, where they had been stranded.

The returnees, who arrived the country in two different flights, were received by the Coordinator, Lagos Territorial Office, NEMA, Alhaji Abubakar Muhammed at the Cargo Wing of the Murtala Muhammed International Airport, Lagos State.

Muhammed said that the Nigerians were assisted back home by the International Organisation for Migration and the European Union under the Assisted Voluntary Returnees Programme which began in April 2017.

FFK wades into feud between Fatima Daura and Aisha Buhari

FFK wades into feud between Fatima Daura and Aisha Buhari Former Minister of Aviation, Femi Fani-Kayode, has taken an exception…

Buhari asks Senate to approve N10bn for Kogi state President Muhammadu Buhari on Tuesday sent a letter to the Senate, …