Comedian, Seyi Law wrote a poem dedicated to Big Brother Naija’s Mike and when a follower called him out for it, he responded.

The poem spoke about Mike’s qualities, compared him to ex BBN housemates, Thin Tall Tony and Dee One who didn’t mention to other housemates that they were married. It also compared Mike to other men and found them wanting, then – strangely – took a turn to talk about Mike making love to his wife after his eviction in graphic details.

A follower who didn’t approve of the poem called out the comedian, writing: “Can this epistolatory be written for Sowore who is fighting for his country. Misplaced priorities of the Nigerian youth.

And Seyi Law replied; “Go and write your own and leave me out of it. Thanks.” 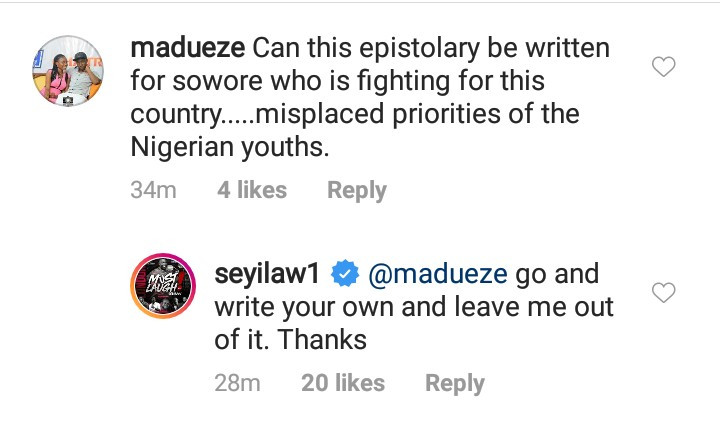 Below is Seyi Law’s poem to Mike:

Have you seen a real man?
Tall enough for every woman,
He is such an brilliance to behold,
He’s gotten an impeccable character,
An amazing way to make you laugh,
He is so athletic,
You wonder what he lacks.
The world feared for him,
And hope he doesn’t fall,
Trapped in the temptation,
For 99days to succumb.
Have you seen a man?
A man like MIKE.
He wasn’t Thin Tall Tony,
Neither was he DeeOne,
He sure wasn’t me at all,
He shared his truth from the beginning,
He said it loud and clear,
He seriously echoed it,
And the fear gripped us all,
He persevered through it all,
And cleared our doubt of his strength,
He offered lovely hands.
He made good connections,
He truly had fun,
And he didn’t fail.
What a man, he is.
A man truly like MIKE
I can hear the bed rattling,
The vibration is quite unusual,
I didn’t see it with my eyes,
But my imagination is weird and wild,
Fists clenched,
And bedsheet is rumpled,
Oh my God,
There is a woman beneath,
What a sigh of relief.
It is his wife after all,
99 days are long gone,
And they are back in each other’s arms.
This is some sweet love,
Even Wizkid never thought of it.
A man I wish I was,
A man I should have been,
A man I can be,
A man like MIKE. 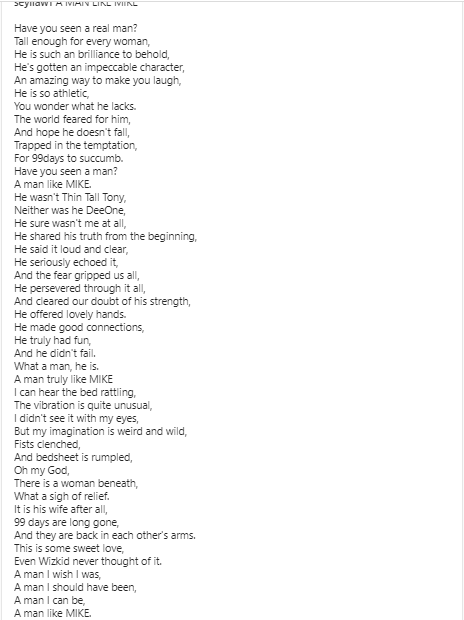 READ  You’re already 35, just manage a divorcee"- Shade Ladipo shows off her sexy man, recalls how the world advised her to 'settle'
Loading...

Following successful conclusion of the 9th Bi-National Commission of South Africa and Nigeria meeting in Pretoria, South Africa, which was…