Rechael Okonkwo has debunked claims of being responsible for the crash of Ken Erics’ marriage to Onyi Adaba which occurred 10 months ago.

Recall LIB reported that Onyi Adaba revealed her marriage to the Nollywood actor was over in an Instagram exchange with a follower, while commenting on Blossom Chukwujekwu and Maureen Esisi’s marital crisis.

However after being roped into rumours of cause of the couple’s marital crisis, Rechael Okonkwo took to Instagram to deny the claim. Though admitting she has a good working relationship with her colleague, the actress stated that curses placed on her by those accusing her of being the reason the couple’s marriage ended will only become potent if she had anything to do with him sexually. 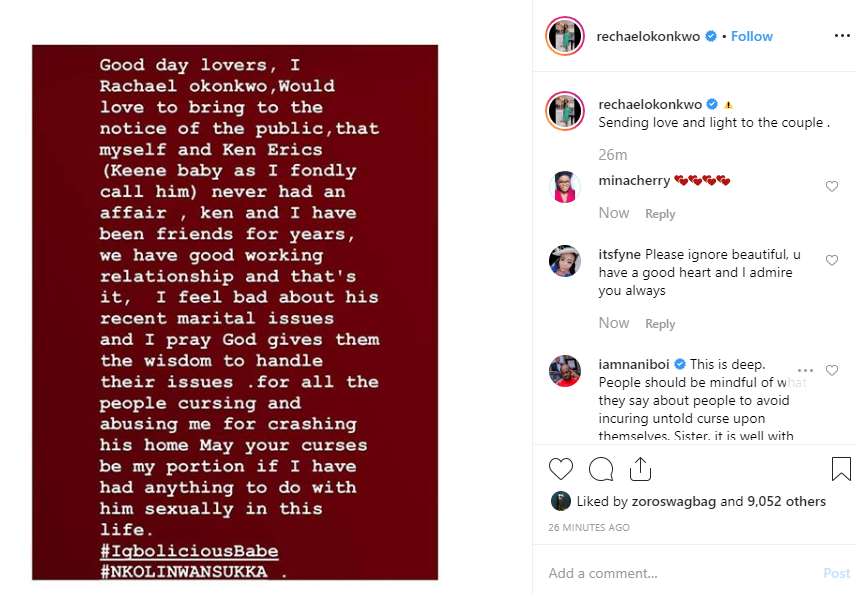 READ  Disqualification of LionHeart is an eye-opener for Nollywood - Nigeria Oscar Committee
Loading...

Some people plotting to set Nigeria on fire - DSS

The Department of State Services (DSS) on Monday September 9, warned that some people are plotting to set the nation on fire.…