Edafe Okporo, a Nigerian gay man and activist based in the United States, has reacted to the homophobic comments that trailed his show which has been aired on the Nigerian Televsion Authority, NTA for the third week straight.

His documentary which aired on the NTA, explored his childhood and background in connection to his sexuality and current status of an African refugee living in the United States.

Taking a swipe at homophobes as he noted that he got both positive and negatives feedbacks, the former Pentecostal Church Pastor stated that the show is airing for young gay people in Nigeria to draw courage.

Edafe Okporo further adviced homophobic Nigerians to tell the Nigerian government to take down the documentary, if it irks them so much. According to him if his African mother can accept him being gay, then anyone can get over the evangelical idea of being morally upright.

The third straight week, my show aired on Nigerian Television Authority NTA and I have recieved lots of positive feedback, I don’t use Facebook messenger you would have seen lots of messages I recieve daily and also negative feedback but this is what I have to say. NTA is partically owned by the Nigerian government so if it bothers you tell your government to remove it from the accepted network. The interview is airing in Nigeria for young gay people to draw courage and not for you, if you are tired of watching turn it off or pay for cable television. *********************************************************
If my African Mother can accept my being GAY then you can get over your evangelical idea of being morally upright. I use to be a minister in a Pentecostal church, so I know the bible as much as you do. I have read the bible cover to cover and one underline fact the bible teaches.

Why do you forget the first and second commandments. No where in the bible was it written as a commandment that thy shall persecute the gays? but it is written that:

Where has your bible teaching led you to, doing all the things that the bible forbids and ignore the one thing the bible accepts which is love.
LOVE WINS.

My name is Edafe Okporo the one who decide to take your shame. Sometimes the most homophobic one’s are also gay. Shut your mouth and drink your coffee, the internal phobia that drive them is because of the fear of acceptance, they live on other people standard and are just jealous of you living your best life.

No thanks #Thisisedafeokporo is my life and am proud of it, I live on my terms, happy each morning I wake up am surrounded by gay friends and choosen family who love me for me and dont expect me to conform to any standard. 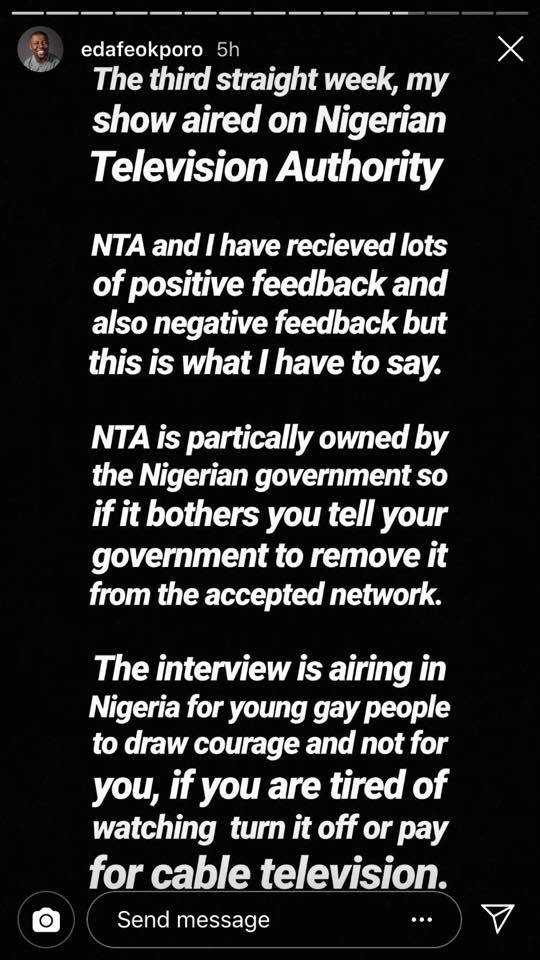 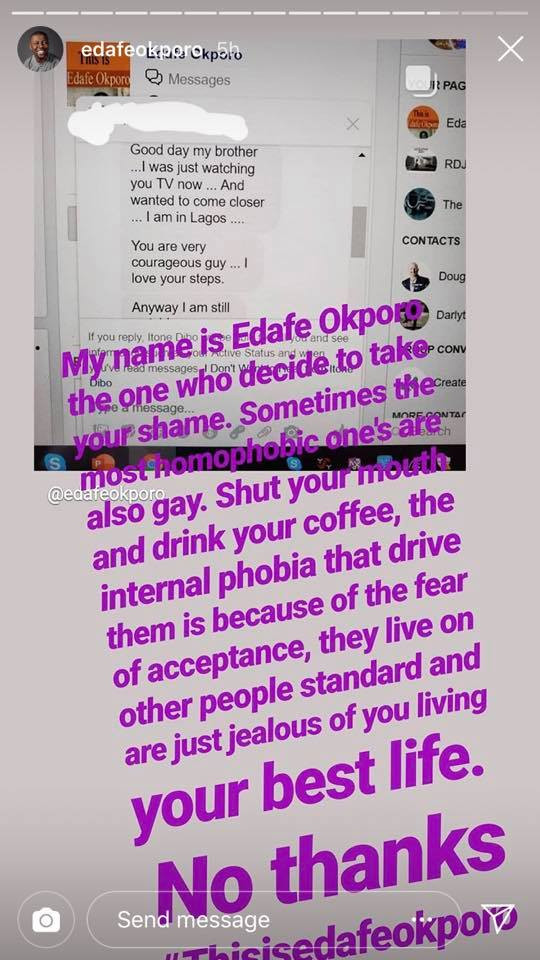 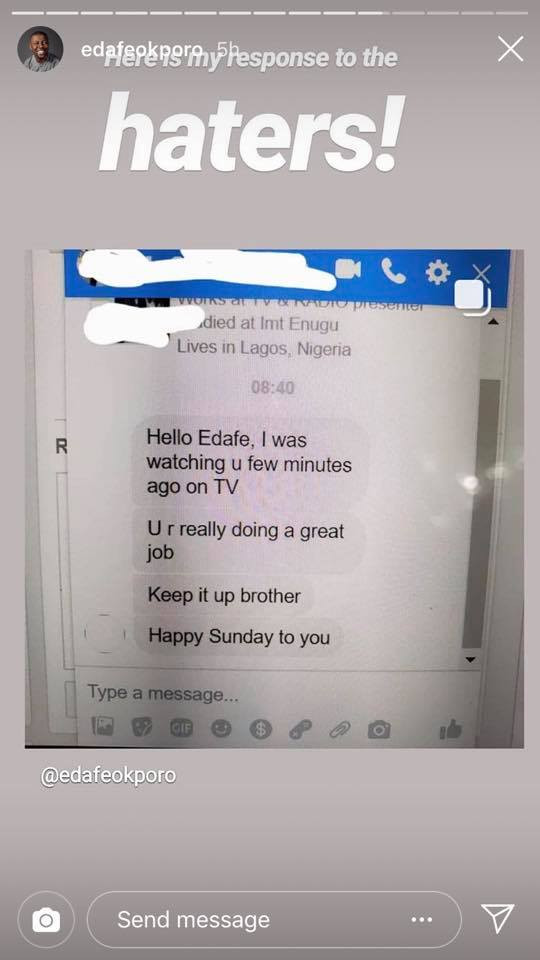 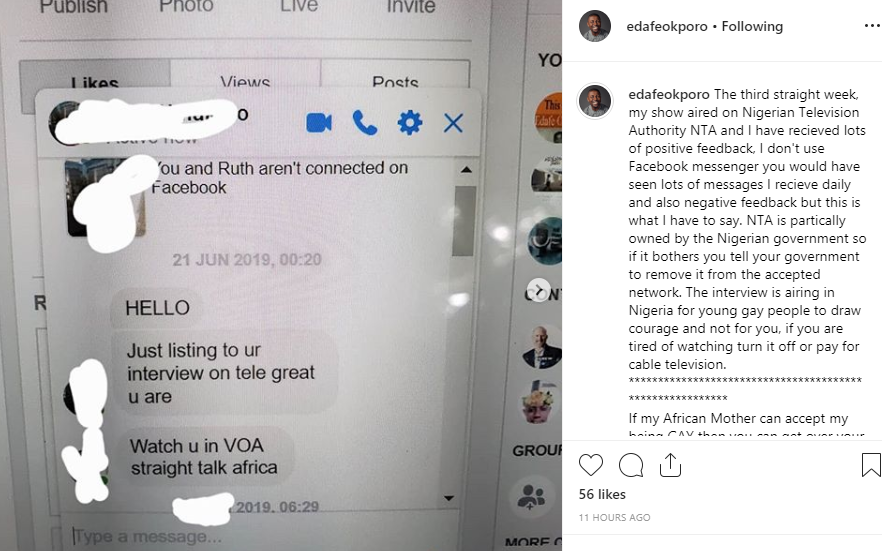 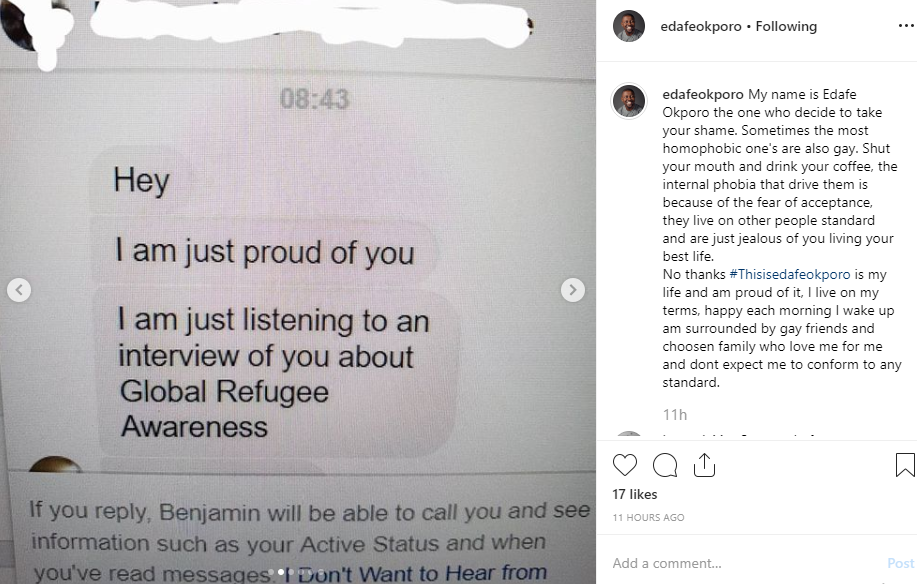 DBanj and his wife, Lineo Didi Kilgrow all loved-up in new photo

Check it out 👇👇 DBanj and his wife, Lineo Didi Kilgrow all loved-up in new photo