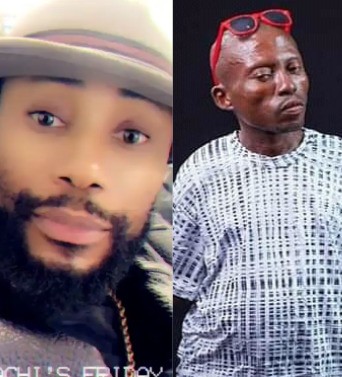 In a post shared on his Instagram page, singer Morachi, appealed to Nigerians to stop making ‘stupid things popular’, He made particular reference to the new comic sensation, Mr Spell who is known for amusingly spelling things wrongly. Morachi in his IG post, accused some Nigerians of exploiting the comic act. Read what he wrote and watch a video below.

”When you speak the truth they call you a hater which is why people like myself often time ignore pressing issues affecting today’s generation & mind my business…..Why are we promoting abnormality & putting it on the world map? So this MrSpells is now a celebrity? He now goes on radio tours & now taking pictures with female fans? Like seriously ?  Y’all had better take that man to the hospital or rehab & check his mental health first if y’all truly wanna be Good Samaritans than give him fame that won’t do shit for him!!! Y’all fucking jokers!!! Y’all Keep deceiving him or exploiting him!!! The fame is good for him but what use is it to him if his mental state ain’t in the right frame ?

They re mocking, Laughing, Ridiculing & exploiting this man & using him to entertain & gather contents for themselves over timberland boots & starboy jersey & some little peanut in his pocket & say they are helping him? Lord May you never bring such funny looking helpers my way!!! This is the last i am going to post about this” he said

Read the piece by Reno Omokri below... On Tuesday, November 20, 2018, the Face of Democracy in Africa, Dr. Goodluck…

YBNL Boss, Olamide has shared his thoughts on “We rise by lifting others” statement made by Davido at the just…