Five suspects including a couple, Mr Azeez Yakub and Mrs Salina Azeez, and three others Isah Wasiu, Abubakar Isiaka and Soliu Yakub were arrested in connection with the human parts. 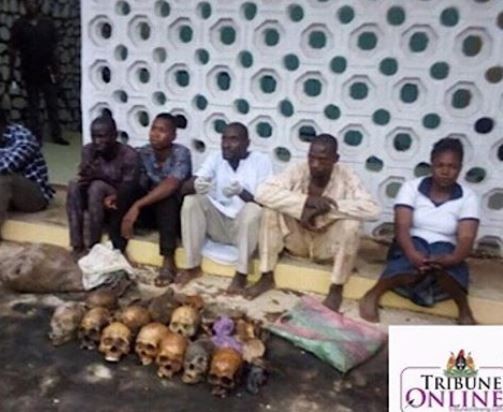 Kwara State Commissioner of Police, Fafowora Bolaji disclosed this at a press conference, last night at the police headquarters, in Ilorin.

According to the police commissioner, “acting on intelligence available to the command about suspected ritual killings around Adewole area of Ilorin by some ritualists, detectives from the police command swooped on a building located at 20 Ole-Opa area of Aromaradu, Adewole Ilorin, and one Yakubu Azeez and four others were rounded up.

A search warrant was conducted in the building, 11 human skulls, several suspected human bones, a bunch of suspected human hair and other items were recovered. Investigation into the matter is ongoing, suspects will be charged to court after the conclusion of the investigation”.

The police commissioner also said a suspect, one Segun Bolatito Akande, was nabbed for selling a stolen sienna bus.  It was a gory sight, last night,when the suspects displayed the human parts at the police headquarters, as the stench from the rotten human parts littered the air.

Thai Lottery Sure Non Miss 3up Direct Winning Set 16-10-2018. The lottery is becoming more popular because user of its…

BBNaija star Tboss, warned against snatching Banky W from his wife Adesua, and she fires back

Actress and Big Brother Naija finalist, Tboss Idowu was quick to blast a troll who asked her not to snatch Banky W…

Man allegedly stabs his lover's other boyfriend to death in Bayelsa

A married man identified simply as Charles has reportedly been stabbed to death by his rival, 35-year-old Eyor Eketen.   The deceased…