Seyilaw identifies suspected serial fraudster arrested by EFCC, says he is the son of his former pastor – NaijaSpects Skip to content

Yesterday, the EFCC announced the arrest of one Adeyemi Olufunmilade, a suspected serial fraudster who has allegedly swindled quite a number of Nigerians.

Comedian, Seyilaw who has also fallen victim of Adeyemi’s fraudulent acts, took to his twitter page to identify the suspect as the son of a pastor in the church he attended while growing up. Adeyemi is said to be the son of a senior pastor in the Christ Apostolic Church where he holds a National office.

Seyilaw who saw the news of Adeyemi’s arrest on EFCC’s official twitter, wrote

”He is the son of a Pastor in the church, I attended growing up. He defrauded me too. @officialEFCC can I bring my case too? Thanks. His father once asked me, who is your father in this church because I begged for N1000 to complete my Jamb form fee and his son defrauded year later”. 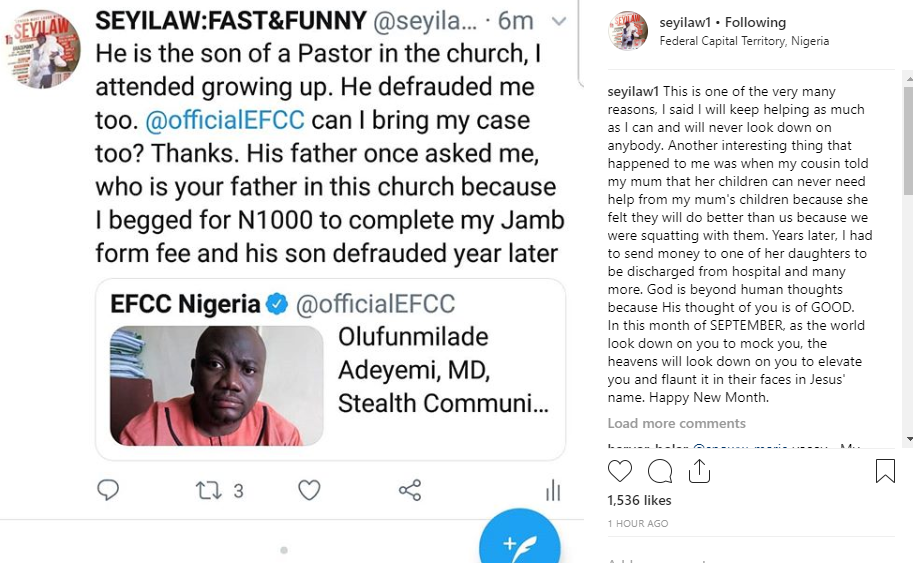 Comedian, Okey Bakassi and his wife, Zizi, are celebrating their 17th wedding anniversary today September 1st. In a post shared…